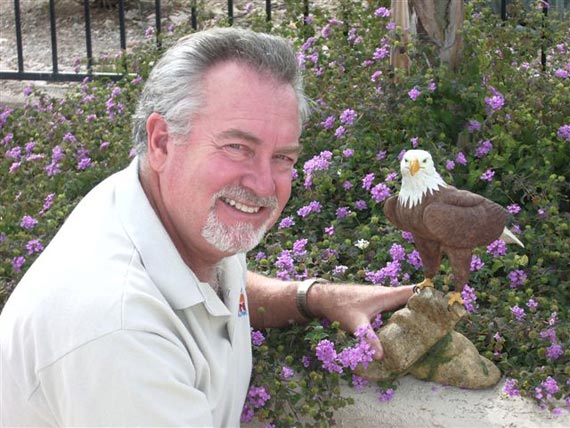 Rob Arnberger started carving in 1977 when he served a tour of duty in the Ozark Country of Northern Arkansas as a National Park Ranger. “I fell in love with caricature carving trying to capture a story in a wood figure, using only knives and gauges to free a humorous face and figure out of a block of wood. “Growing up in the southwest and working as a park ranger in many parks across the U.S. gave Arnberger a particular perspective on caricature carving. “I began to carve what I knew best—working cowboys, hill-folk, and working park rangers.”

Over time, his work became in demand from colleagues all across the national parks as well as other private collectors. Arnberger carves his caricatures out of Basswood, a favorite carver’s wood. Once a pattern is developed Arnberger cuts a rough figure out on a band-saw. Then, using only knives and gauges he begins to “cut away anything that does not look like what he is carving.” Arnberger then realistically paints the carvings using thin washes of acrylic to give life and animation to the figure.

Rob Arnberger’s love of the out of doors and wildlife of the parks led him to also take up wildlife sculpture, specializing in birds. “Capturing the essence of bird life and releasing the spirit and personality of a wild bird out of a block of wood is one of the most challenging aspects of my bird carving.” Sometimes placing the bird in a special habitat adds further realism to the carving. Bird carving must focus on realism and extreme detail. Success is measured when the finished wood bird “emotes life and tries to fly away.”

Arnberger’s success in carving and painting birds has been noted by increasing numbers of collectors who proudly display his birds. Many collectors commission specific birds in special poses and in special habitats. Arnberger creates his birds from Tupelo, a favorite bird carver’s wood using a variety of small, yet sophisticated micro-power detail tools, flexible shaft power tools, and burning instruments. The birds are realistically painted in acrylics and frequently can take hundreds of hours to complete. ing career Arnberger has carved hundreds of caricatures and birds and has been represented by galleries in Tucson, Tubac, Ventura, Austin and Santa Fe. He has won numerous awards at carving shows but now confines his work to selected galleries and collector commissions. Visit the pages through the site to examine his portfolio of completed carvings available for sale or special commissions.