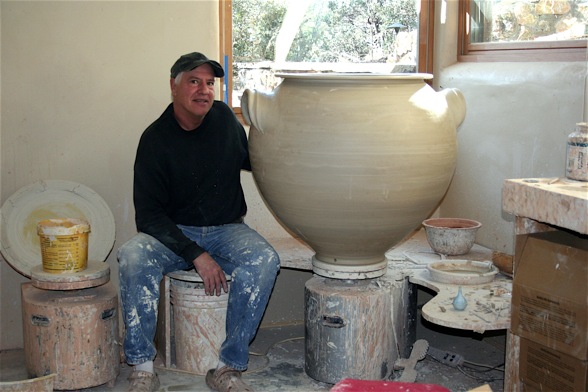 Heath Krieger, When he discovered the small art workshop at this boarding school on Catalina Island at age of 14, Heath also discovered his life long pursuit. In 1968 when he was 20 years old, Heath opened his first gallery a nook of a studio in Solana Beach, California. Ten years later, Heath relocated to Prescott, Arizona, where he lives today. The move from California to Arizona proved to be fortuitous, as the diversity of the Soutwest landscape continures to influence both the forms and glaze colors of Heath's work.

However, it is impossible to claim that the styles of Heath's body of work are limited to thier immediate Southwestern context. Far Eastern techniques prove to be a consistent influence in those Heath employs: from elegant Japanese brushwork to rake, Heath draws from traditional Eastern methods that render the body of his work formal and exotic. Perhaps this is why his art is collected throughout the United States and internationally by private collectors and museums. In Heath's creative endeavors, not style will suffice alone.

Heath approaches the notion of art from multiple angles. Although ceramics occupies a primary position in this working life, Heath also teaches jazz improvisation to students who consistently go on to pursue music at the highest levels in universities and the urban jazz world. Heath's musical relationship with art ultimately compliments his relation with ceramics; for Heath "art" is always insubstantial outside of the activities in which it is produced. For Heath, art is a creative process of doing and it utilizes the most practiced skils as as consistent experimentation. Thus the broad range of his artistic capabilities and the multiplicity of styles in ceramics specifically, but also implied by the nature of jazz music, reflect and even broader conception of art that encompasses and permeates Heaths's life.